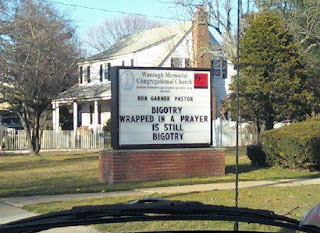 I make an effort to avoid words like "hate" and "bigot" except where they're very clearly deserved; in many cases a more accurate description would be the tone deafness that comes from living inside an echo chamber (which the evangelical subculture most definitely is).

Take, for example, actor Kirk Cameron, who has found himself at the center of a controversy over his very tone-deaf comments about homosexuality. What he said was a simple articulation of the tenets of most conservative strains of Christianity (including the one he has devoted his life to); how he said it is quite another matter.

This post by Jim Burroway sums up the problem quite nicely, reversing Cameron's statements to clearly show how they would sound if directed at evangelical Christians. Suddenly Cameron's "I'm just as flawed" concession doesn't seem quite as gracious.

Given my own background I'm inclined to give people like Cameron the benefit of the doubt; they sincerely believe they're "speaking the truth in love" when they make statements like his. And throwing around loaded words like "bigot" tends to do more to shut down communication than to convince anyone of anything. Even so, the Kirk Camerons of the world need to be encouraged to think a little harder about how their words sound to those they're talking about; the compassion they claim to hold in their hearts requires no less of them.
Posted by Eugene at 3/26/2012 09:56:00 PM No comments:

This week I came across news of a new book being published that takes a scholarly look at the Book of Revelation. It occurred to me that, for all the time I once spent studying Revelation, I actually know very little about the book's history and context, and even less about the apocalyptic genre that was popular at the time it was written.

Growing up I was quite fascinated by Revelation, which I had been taught was a literal prophecy of the violent end of the world that could begin at any time. I read dozens of articles and books and heard numerous sermons speculating on the meaning of every symbol in its verses and how they might match up with current events and people. Was the Antichrist a current politician? Was the European Common Market the beast with ten horns? Was the United States the great harlot? The conjectures were endless.

By my college years I'd heard enough false predictions about Christ's return ("88 Reason Christ Will Return in '88" was far from the first - or last) to dampen my enthusiasm for the subject. The final nail in the coffin was coming across a book in the university library's annual book sale, written in the late 1930s, that predicted that Mussolini was the Antichrist. By the time the first Left Behind book was published a couple years later, I was already done with the whole sideshow.

At that time in my life I still believed there would be a literal Tribulation (whether the Rapture happened at the beginning or end) and a literal Antichrist; I'd merely come to realize that God didn't mean for us to spend so much time and energy trying to pinpoint when and how it was all going to happen. Funny how so many Biblical literalists over the years have forgotten that Jesus himself said nobody would know when he was returning. Actually, it's more sad than funny.

Over the years since college, I've gradually come to see how a literal interpretation of Revelation has encouraged (or at least highlighted) so many of the worst traits that are commonly associated with American evangelicalism:

-A heavy focus on the next life (which we may be whisked away to at any moment) that leaves us disinclined - and even unable - to truly engage in this one.
-An "us versus them" mentality, in which "them" is everyone fated to take the Mark of the Beast.
-An arrogant attitude toward everyone in the "them" category.
-A view of Jesus as a macho, violent warrior with no qualms about killing anyone who doesn't believe the right things about him.
-An inclination to look for (and find) persecution around every corner.
-A lack of concern for making this world a better place, since we could be saying goodbye to it at any moment.
-A tendency to caricaturize every political opponent as a potential Antichrist.
-An all-absorbing fascination with scouring every world event for signs of the end times.
-A belief that our support for Israel requires absolute and unquestioned support for every action it takes even if it leads to endless preemptive war against the entire Muslim world.
-A mandate to proselytize aggressively in a manipulative, fear-based manner.
-A fixation on sin avoidance.
-A propensity to spend millions of dollars on mediocre books and fourth-rate movies and then praise them for their "message."

Not that Revelation itself (or John of Patmos) is to blame for the many ways in which our misinterpretations of its rich imagery have transformed the faith of many into a tragic parody of the message of Christ found in the Gospels. But in that same vein, perhaps Revelation does us a favor (even before we mine its depths for the riches we have overlooked for so long) by forcing us to confront the folly of interpreting the Bible in an overly literal manner rather than letting it speak to us on its own terms.
Posted by Eugene at 3/10/2012 12:02:00 PM No comments:

Email ThisBlogThis!Share to TwitterShare to FacebookShare to Pinterest
Labels: Literalism, The Journey, Theology


The Beginning, by Lifehouse

I've tried to avoid overusing any one artist, but Lifehouse just has a lot of songs that resonate with me. The Beginning is a track you could easily miss if it were playing in the background; you might think it was a pretty song and go on with what you were doing without another thought.

But when I pay attention to this song, it can evoke a wide range of emotions in me. At different times it can make me melancholy, hopeful, content, wistful or contemplative, sometimes all at once. And every now and then it strikes a deeper chord and gives me a hint of a glimpse of something transcendent - something that's never quite fully within reach, but that I know is there.