The day after my last post went up, the Denver Post published this article on the changing political landscape within the evangelical church.  It also highlights my church, as a nice bonus.

No, you can't see me in the Highlands Church worship service picture, though I was there when the photographer took it.  Which is probably just as well, given the liberties cameras seem to like to take with my face...
Posted by Eugene at 4/26/2012 10:06:00 PM No comments:

For as long as there has been government, rulers have sought to convince their subjects that they have a Divine mandate (or its nearest equivalent) to rule. This is little different in democratic societies, though in terms of the American political scene it hasn't always been as blatant (and polarizing) as it is today.

The religious right is the most obvious exemplar of this "God is on our side" mentality, with liberals continually framed as both anti-American and anti-Christian. But the religious left doesn't always refrain from playing the same game, even if it gets less attention for doing so. "Jesus was a socialist" is a commonly-heard catchphrase, often accompanied by verses like Matthew 19:21.

Inasmuch as such statements serve to jolt those who have come to associate the Gospel with laissez-faire economics, anti-gay politics and an interventionist foreign policy, the left does have a point. Jesus' advocacy for a self-sacrificial lifestyle with an emphasis on helping the poor and disadvantaged does in fact line up with socialistic ideals.

In the world we inhabit, however, the concept of socialism cannot be divorced from its political connotations. And in that regard, Jesus was not a Socialist - he never advocated government redistribution of wealth or, for that matter, any governmental system. Unless his statements on the subject all went unrecorded, Jesus seemed remarkably unconcerned with our politics and far more interested in how we treated others on an individual and community level.

Furthermore, while most would agree there is merit in government providing a social safety net for its citizens (though what that net should consist of is open to debate), the idea that Jesus would have been an activist for such a system doesn't add up any more than the idea that he would be standing with the Family Research Council against gay rights - it doesn't fit with the witness of the biblical authors who chronicled his life and ministry.

In contrast to what we see in the examples of Christ and the early church, government-run aid programs are the most depersonalized form of charity possible.  In the early (pre-Constantinian) church, members gave not only their material resources but also their time and even their lives for the benefit of their neighbors.  They were directly involved in each others' lives and knew (or got to know) the people they were helping.

When the government takes money from me via taxation, on the other hand, it doesn't matter whether I give willingly, or even whether I like of how it will spend that money; I can be as apathetic and self-centered as I want to be, as long as I care enough about avoiding a prison sentence to pay my taxes.  I don't ever have to think about the poor people my tax dollars might be helping, and even if I do I can discharge my civic duty without ever having to actually meet any of them.

Similarly, the government employees who administer the aid programs my taxes help fund are seldom directly involved in the lives of the people they're helping.  They have a list of rules (usually quite rigid) that they have to follow when determining who gets help and how much, and those arbitrary guidelines may or may not address the actual needs of those recipients.  The government workers may genuinely care about they people they're working to help, but that concern is entirely irrelevant as long as they fulfill the minimum requirements of their job descriptions and do an adequate job of following and enforcing the rules.

And the recipients' attitudes are just as irrelevant.  As long as they jump through all the right bureaucratic hoops, it doesn't matter to the government whether the aid they're receiving truly improves their lives, or whether it slowly hardens their hearts and smothers their own charitable instincts.

So to say that Jesus would be camping out with the 99 percenters, demanding higher taxes on the rich and agitating for a single-payer healthcare system is to miss the point of his message.  Yes, it absolutely matters whether we help the poor and disadvantaged, but first and foremost it's about each of us engaging with our neighbors, living in community with them and addressing their needs as we become aware of them.  Jesus instructed the rich young man to give away all of his possessions not because wealth is an inherent evil, but because it was what stood between the young man and God.  As Christians we give to the poor in part for their sakes, but also in part for ours.  No law or governmental program can ever transform the human heart or make a single one of us more compassionate.

Having said that, by all means vote your conscience, seek justice and allow your faith to inform your politics, whether you lean to the left or right (or in another direction).  But invoking Socialist Jesus to browbeat others into accepting a social welfare platform as the Christian political agenda is only slightly less disingenuous than James Dobson or Chuck Colson conjuring visions of Sodom and Gomorrah to frighten the faithful into voting to oppress their gay neighbors.  An iron fist waving a Bible is still an iron fist, no matter which page it's pointing to.
Posted by Eugene at 4/21/2012 11:11:00 AM 1 comment:

Sometimes the world reminds us that there's still good reason to hope.

1. Not all high school jocks are bullies, as this story proves. Sometimes they really are heroes.

2. As Nate Phelps' story shows, even the most radical extremism can be escaped. I'm thankful that my own escape from fundamentalism was considerably less dramatic.

3. Equality seems to be centuries away in much of the Muslim world, but even Islam isn't monolithically anti-gay, as this story demonstrates.
Posted by Eugene at 4/12/2012 09:56:00 PM No comments:

Email ThisBlogThis!Share to TwitterShare to FacebookShare to Pinterest
Labels: Miscellany, Stages of Faith 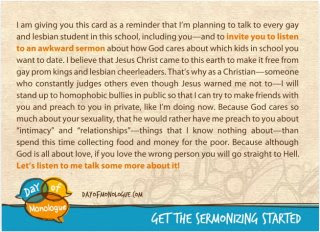 Sadly, this parody (which originated here) pretty much sums up the "Christian" approach advocated by groups like Exodus and Focus on the Family for engaging with LGBT individuals. While I can attest to the existence of Side B individuals who genuinely love and respect their gay friends and family members, the waters have been so badly poisoned by fundamentalist and religious right groups that genuine dialogue is difficult to initiate, much less sustain. And that's not terribly likely to change on the so-called Day of Dialogue...
Posted by Eugene at 4/06/2012 09:54:00 PM No comments: