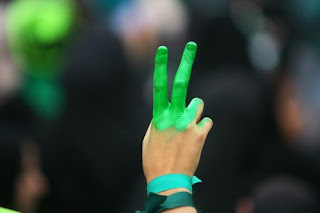 Email ThisBlogThis!Share to TwitterShare to FacebookShare to Pinterest
Labels: Miscellany

Totally. I have been leaving comments all over the YouTube videos that have been posted, just letting the posters know we are watching and caring and hoping for the best. This is history unfolding in real time, chronicled using technologies that Americans often use as mere diversions. It's weird and inspiring and sad. I hope it ends well. It's very obvious from the raw YouTube footage that it's already ended badly for quite a few people.

You might like this. My friend's 8-year-old daughter can be spoiled and bratty, but she has compassion, too. When she was told what the stuff on TV was about, she immediately went to her room and painted her fingernails with a bright green marker to "say I'm with those people in Iran who want a fair vote." I about cried when she explained why her bitten-off little nails were that color. I hope the brave Iranian protesters know how many people around the world want them to succeed.

That's a cool story. Here's hoping the people of Iran are able to take control of their own destiny.